There are 5 main weeds in gardens each doing there own thing to annoy gardeners. in this article i will try to explain the 5 weeds and the trouble they cause in the garden and how to try to eradicate them .

The weeds concerned are as  follows

Ground Elder – A weed which is prolific in the garden. It spreads by underground rhysomes which spread all over, even getting into the roots o

f garden plants and competing for water and nutrients. normally the weed spreads from   near by gardens, it is a fairly shallow  rooting plant with creeping stems. its top growth is that of dark green leaves with tall white flowers .

An invasive weed with fern like top growth and long deep black rhysomatious roots which creep under the soil competing for light, water and nutrients reducing the strength of the cultivated plant

Couch Grass – A pernicious weed which reproduces all over the garden. It is a member of the grass family 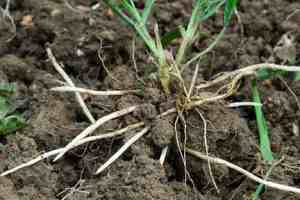 with long white roots which creep under the soil surface. New plants can be produced by every part of the plant left in the ground. Each leaf joint will produce a new plant invading the ground. The top growth is that of the grass plant.

Bindweed  – a weed which comes to life in early spring emerging

through the soil  its a climbing weed which climbs all over the plant eventually choking the plant it produces lot of white trumpet like flowers  underground it produces lots of long white roots creeping underground any part of the root broken off will produce more plants .

Comfrey  – not always  recognised  as a weed, this plant is known as a herb which has esc

aped its confines of the garden and become an invasive plant appearing every were, its not wanted. it is a plant with medium to largish leaves blue flowers and a long black tap root a bind to gardeners as i comes up all over but on the positive side the leaves can put in a bucket of water and left to steep and the liquid produced can be used as a feed for plants and vegetables .